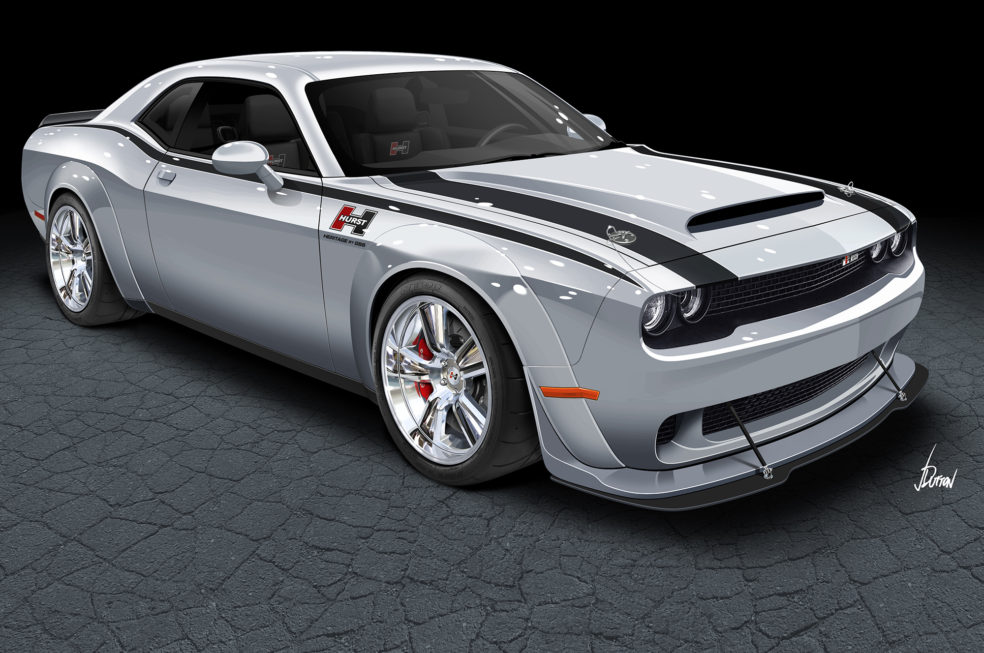 Stunning! That’s the word that comes to mind when I laid eyes on another one of Larry Weiner’s Special Edition Vehicles. I remember the feeling of watching him unload the very first Hurst Heritage Edition Kenne Bell R-Code Mustang at the Television Motion Picture Car Club’s Annual Car Show at CBS Studio Center in Studio City, California on July 4, 2016... Just Stunning!

If you’re wondering what the TMPCC is, they are an entertainment industry car club that not only has some very recognizable television and motion picture personalities in their club, but they also have a strong pool of talented car designers and builders who have appeared on television or built vehicles for motion pictures. With members like Chip Foose from “Overhaulin”, Rick Dore from “Lords of the Car Hoards”, Steve Strope from “Hand Built Hot Rods”, Troy Ladd from the upcoming television show “The Ride That Got Away” and many more, it truly is a privilege to have Larry and his wife Debbie in the TMPCC family. Not only because they are wonderful and talented people, but because it allows them to display their rides at TMPCC events. And Larry has even appeared on another TMPCC members show, Stacey David’s “Gearz”. The rich heritage of world-class muscle cars that Larry designs, builds and offers through GSS Supercars is impressive. This November I had a chance to speak with Larry about his latest creation, the 2018 Hurst Heritage by GSS 50th Anniversary Dodge Challenger, which was unveiled at the 2018 SEMA show in Las Vegas, Nevada.

Larry has found success in so many ways over the years. He recently moved from Southern California to a beautiful home on five acres in Oregon; he’s built hundreds of custom super muscle cars for exclusive clients; he works with a world-class talent team; has a personal collection of some very special classics; and he also has a wonderful wife who has been with him through thick and thin for the last 40 years.

Building new generation Mr. Norm’s Mopars (which was a legendary MOPAR performance dealership in Chicago during the muscle car era of the 1960’s and early ‘70’s) and spearheading the exclusive recreations of Hurst limited edition modern muscle was not Larry’s first career. But the car community is all the better for his decision to get involved in the custom car manufacturing world. Supported every step of the way by his best friend and wife Debbie, Larry has been designing and building custom cars professionally for more than 25 years. This includes designing and building dozens of rides that have been on display at SEMA.

So what drives Larry Weiner’s passion to create his finely crafted modern classics? Like most car guys, it began in his early teen years watching the car scene develop on the southwest side of Chicago. Nostalgia for those golden years of hanging out with friends, friendly street races and moving from one fast car to the next helped form his calling.

Nostalgia is that personal happy feeling of connection to the past. For us car lovers, that nostalgia typically involves fast and cool muscle cars from the 60s. One of the most beautiful special edition muscle cars from that era - the 1968 Hurst Olds 442 - came from the collaboration between two iconic companies – Hurst and Oldsmobile.

Designer Larry Weiner gives us insight into the thought process of creating a new legend.

Larry: “To us, designing and building the Hurst Heritage By GSS 50th Anniversary Challenger, a thoroughly modern muscle car that celebrates an iconic classic like the 1968 Hurst Olds 442 required a faithful approach and attention to detail. The first thing we took into consideration was the fact that there are 50 years of separation between the 2018 Hurst Heritage By GSS 50th Anniversary Challenger and the original 1968 Hurst Olds 442. As we all know, there have been significant changes in performance, safety, emissions and certainly design during the last half-century. The fact is, these vehicles are decidedly different in many ways, yet they share the fundamental attributes that make them appealing to enthusiasts of all ages who admire and desire high-performance muscle cars that celebrate both eras. As an example, enhancing the similarities are the bulges from the Challenger Wide Body Fender Flares that almost mirror the fender bulges that were prominent on the 1968 Hurst Olds 442, adding further credibility to the choice of the Challenger. Carefully taking into consideration the differences, and in some cases, similarities, our goal was to create a real-world modern tribute to the '68 Hurst Olds 442 based on the 2018 Challenger Hellcat Wide Body.”

When setting out to pay homage to a classic, choosing the right modern car is key, especially since Oldsmobile isn’t around anymore to provide a 2018 Cutlass.

Larry: "The new Challenger is more similar in shape to the vintage 442 than any muscle car built today, however the proportions and design cues are much different. The goal was to remain as faithful as possible to the original contrasting graphics on the 1968 Hurst Olds 442 while making sure that they flattered the appearance and body lines of the Challenger. The contrasting stripes on the hood and body sides, along with the one year only black overlay that covers the trunk lid and frames the rear window was another cue that we were determined to emulate with the new Challenger.”

With the right car selected as the canvas, there were several more challenges to get this tribute correct.

Larry: “The first challenge we had to face were the wheels. The new 2018 - 2019 Challenger Hellcat Wide Body, Demon, Red Eye and the R/T Scat Pack Wide body models require not only a wider wheel, but a significantly different offset than a standard Challenger.

The wheel we developed consists of a forged center that was cut out of a solid block of billet on a CNC machine. The design of the center looks exactly like the positive offset Hurst Stunner wheels we have been using on standard width Hurst Heritage By GSS Challengers, but are designed to favor a more nearly zero offset, complemented by backspacing designed to accommodate the fender flares that increase the body width by 3.5 inches. As a result of the wider wheels that are required on a Hellcat Wide Body, a highly visible section of the rim is exposed beyond the center. This is complemented by a smooth lip, the combination of which hints at the appearance of the late 1960’s wheel trim rings that were standard equipment on most muscle cars of the era, including the 1968 Hurst Olds 442. As a final note on wheels, a stock Hellcat Wide Body utilizes 20-inch x 11-inch wheels at all four corners. We stayed with 20-inch x 11-inch on the front but increased the rears to 20-inch x 12-inch, matched with a 345/30ZR20 tires. The result is a tire with a larger contact patch for enhanced traction.

The next challenge was color. The 1968 Hurst Olds 442 was silver, accented with gloss black primary stripes and white pinstripes. The big surprise that none of us saw coming for the 2019 model year was that silver would be discontinued as a standard Challenger color. The original plan was to order the Challengers in Billet Silver and paint the gloss black primary stripes and overlays, along with the white pinstripes. When we found out that silver had been discontinued as a color for Challengers, we decided that there was a silver lining to the dark cloud. The solution was to custom paint each Hurst Heritage By GSS 50th Anniversary Challenger the actual color used on the original 1968 Hurst Olds 442: Peruvian Silver Metallic. Each Challenger will be ordered in black, completely disassembled and custom painted in Peruvian Silver Metallic, then reassembled. While this creates a significant amount of work and expense, the result will be a 50th Anniversary tribute that is even more faithful to the original than we had planned. Plus, since this is a custom painted car, it will add to the cachet of the 50th Anniversary Challengers that celebrate the lineage to the original 1968 Hurst Olds 442. Serious Hurst enthusiasts will appreciate the attention to detail and the goal to “get it right."

Another challenge was interior design and color. The interior on the 1968 Hurst Olds 442 featured the standard factory 442 vinyl seat covers. While the color of all of the 1968 Hurst Olds 442 interiors was black, enthusiasts today demand a choice of color, patterns and even contrast stitching. We have worked with Katzkin to develop a very distinctive custom leather interior that reflects the combination of modern and vintage themes that are available in several different colors. Not only are they attractive, but it also empowers the enthusiast to create a unique interior that best suits his / her taste and desire for personalization."

With all of this amazing attention to detail, you can see why discerning clients trust Larry and his team to build their dream car. Larry shared with us a few very special touches that are available as options on the new 2018 Hurst Heritage By GSS 50th Anniversary Challenger.

Larry works with each client to make sure their car is unique. There are some variables and design choices within the Hurst Heritage 50th Anniversary Challenger program that can help ensure that each vehicle in the limited edition serial numbered production run is a 1 of 1 build.

Passion based on nostalgia for the cool trends and themes from the past can lead to great things. If you drove a Hurst Olds 442 back in the day, this new interpretation is seriously calling your name. Check out the gallery of beautiful photos and information brochure to get a better sense of the stunning quality and attention to detail that’s been put into the 2018 Hurst Heritage By GSS 50th Anniversary Challenger. Then go to the GSS-Supercars website and check out some of the other amazing creations Larry has designed and offers. 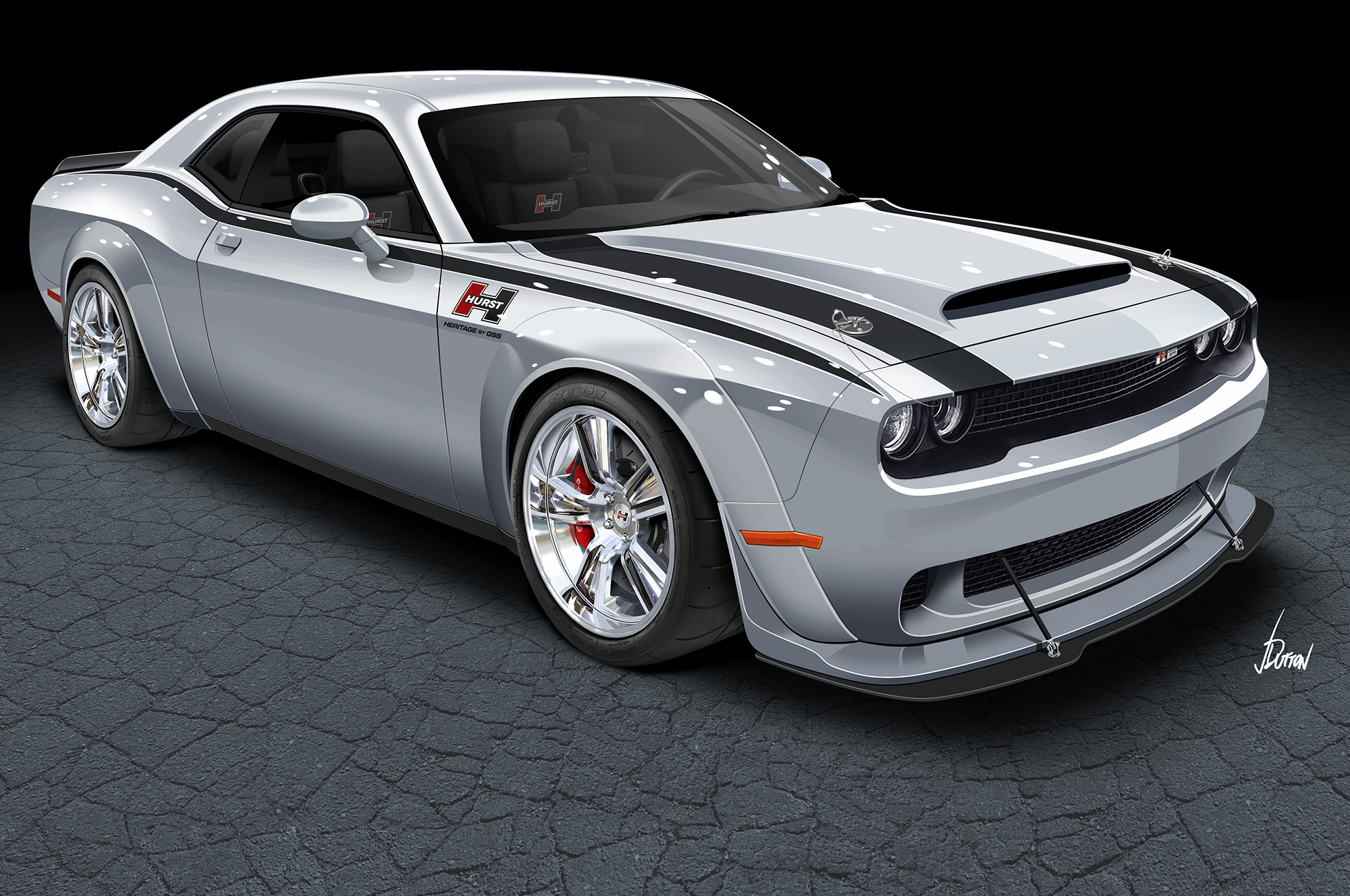 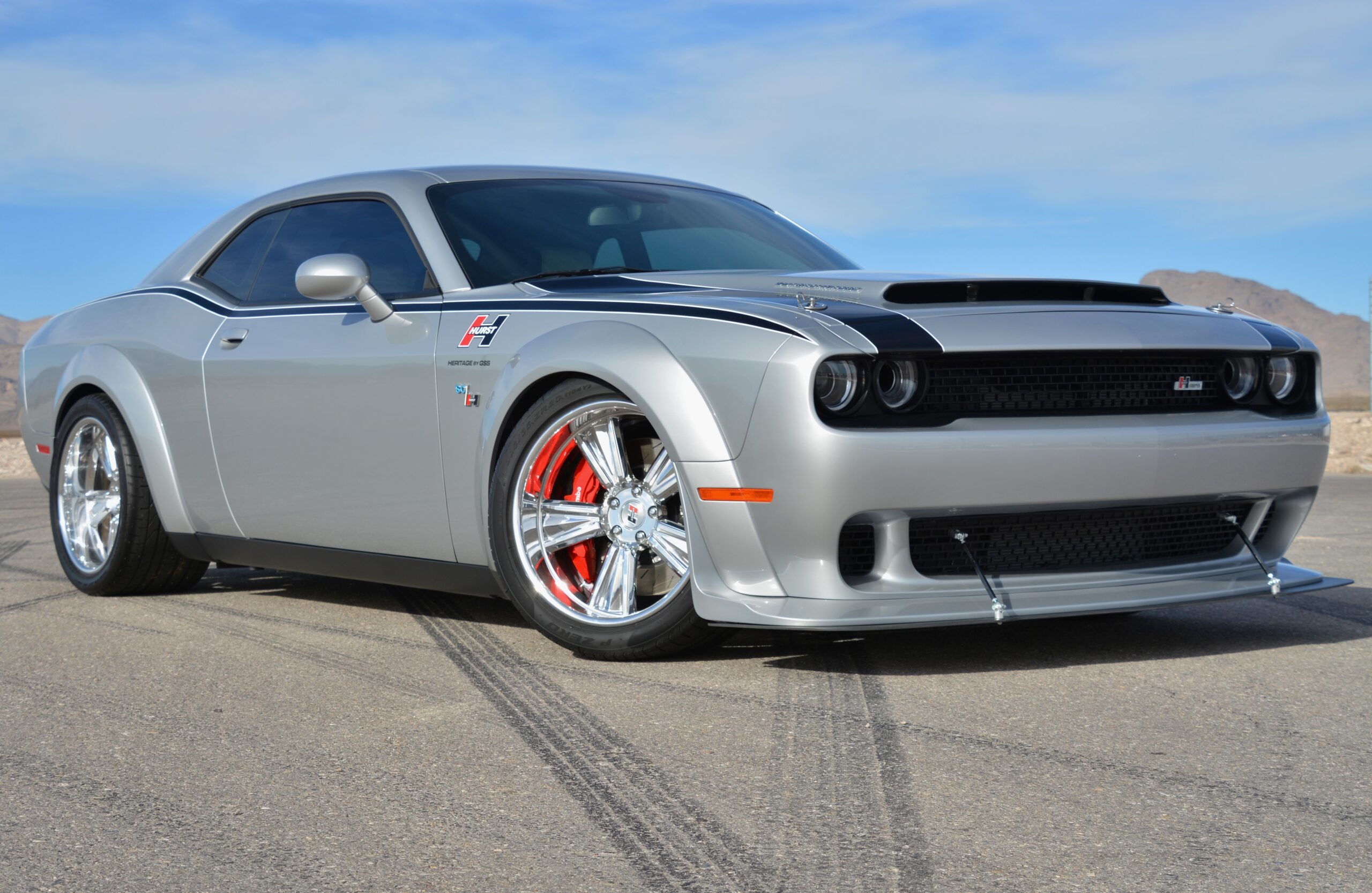 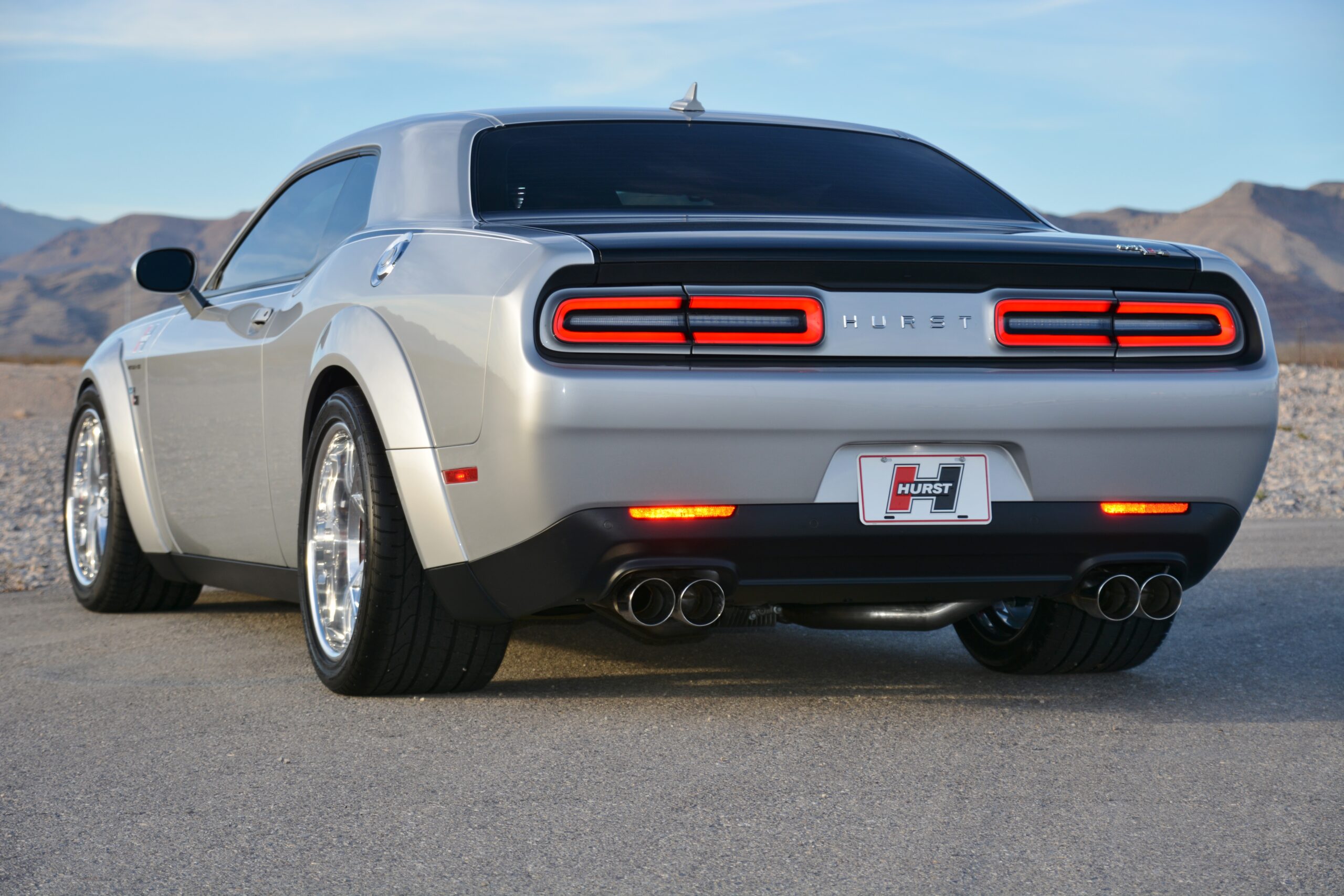 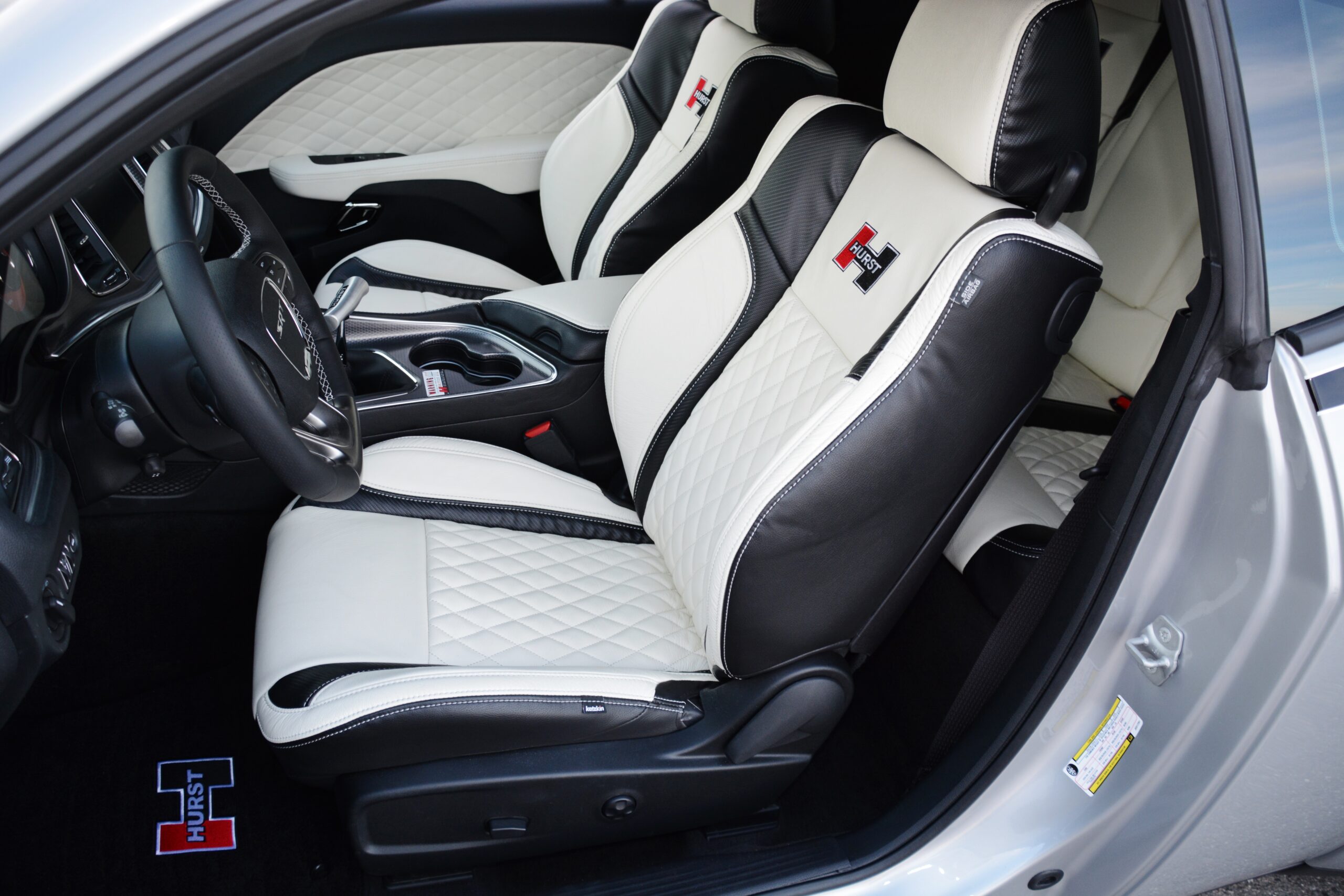 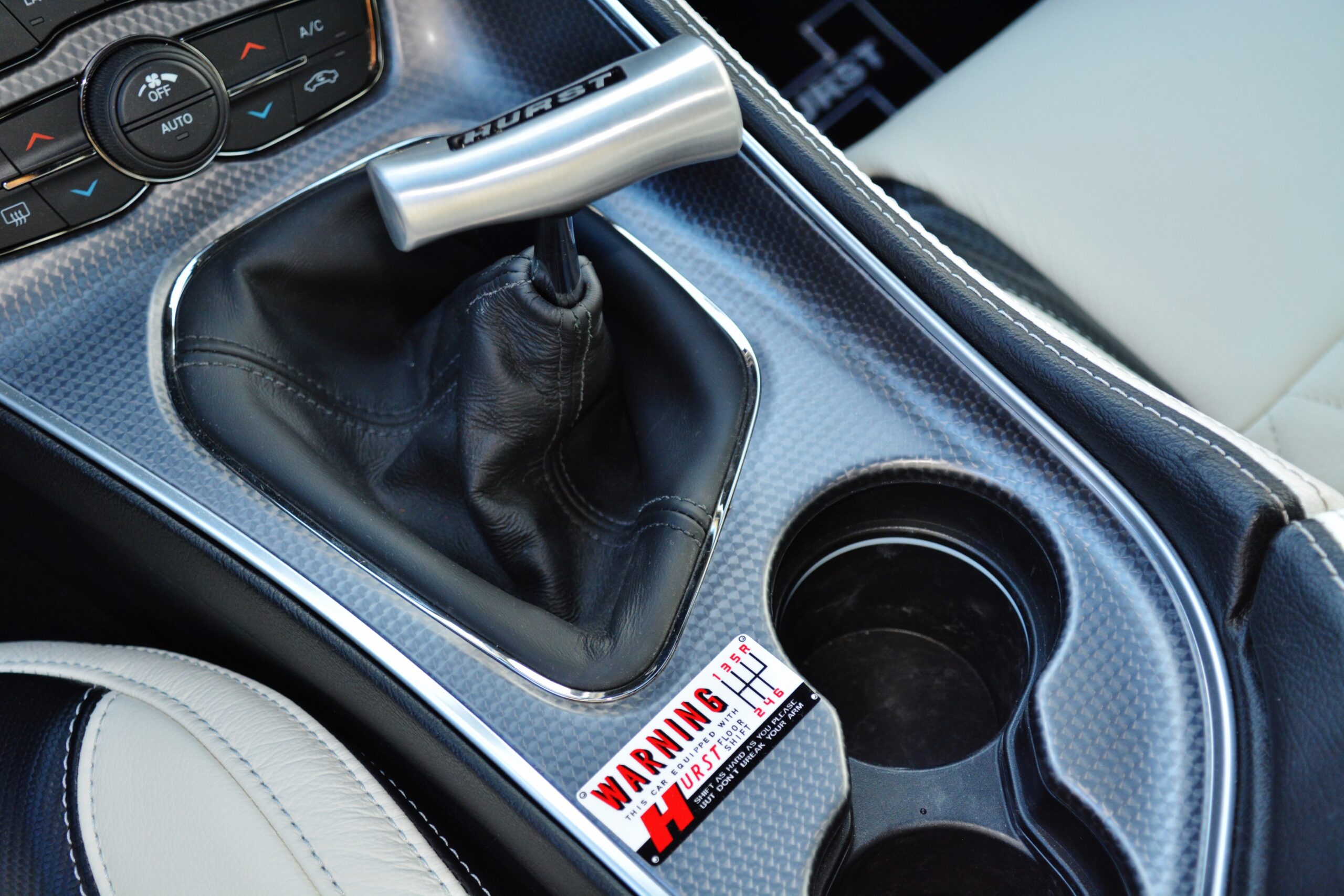 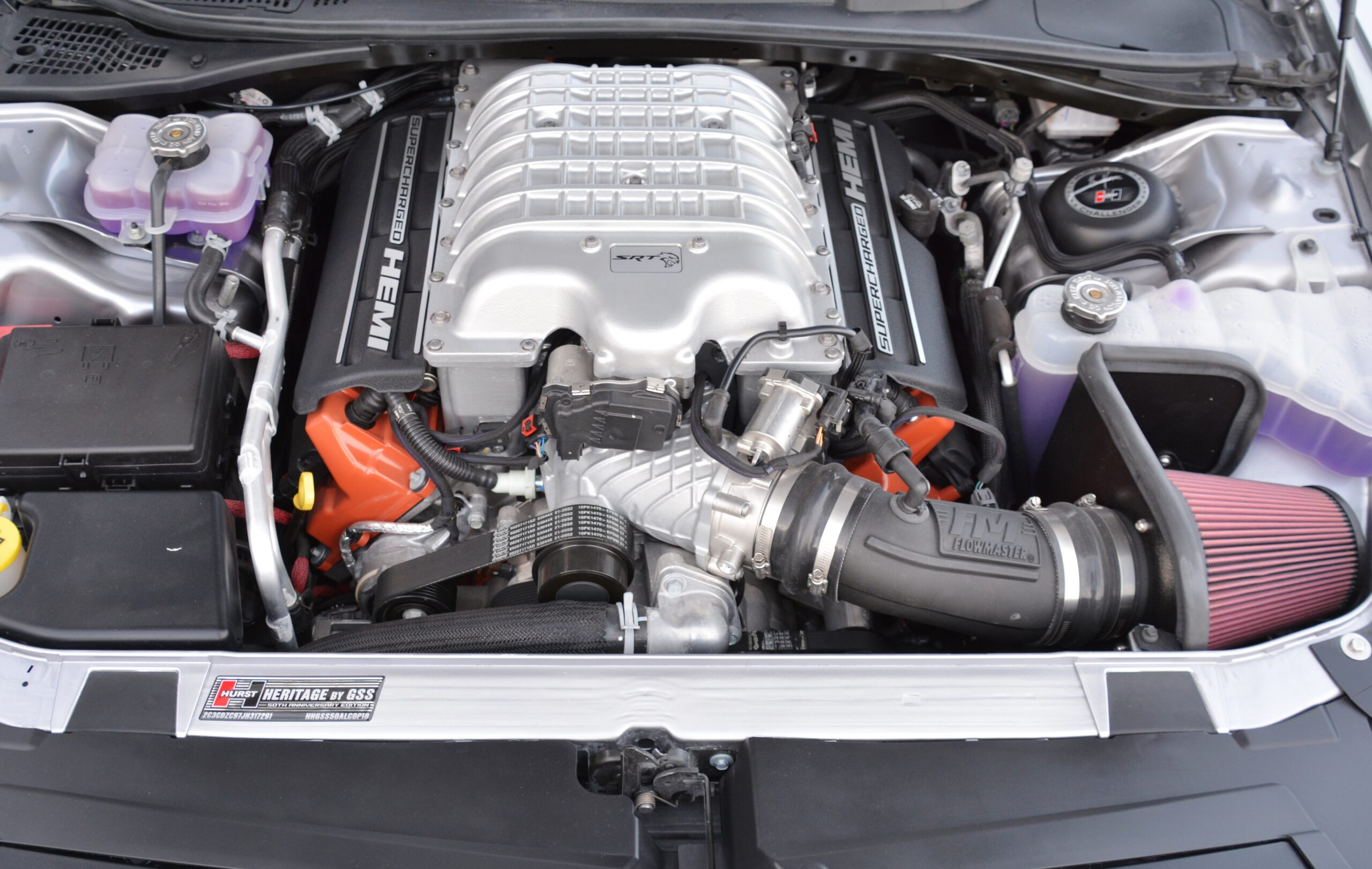 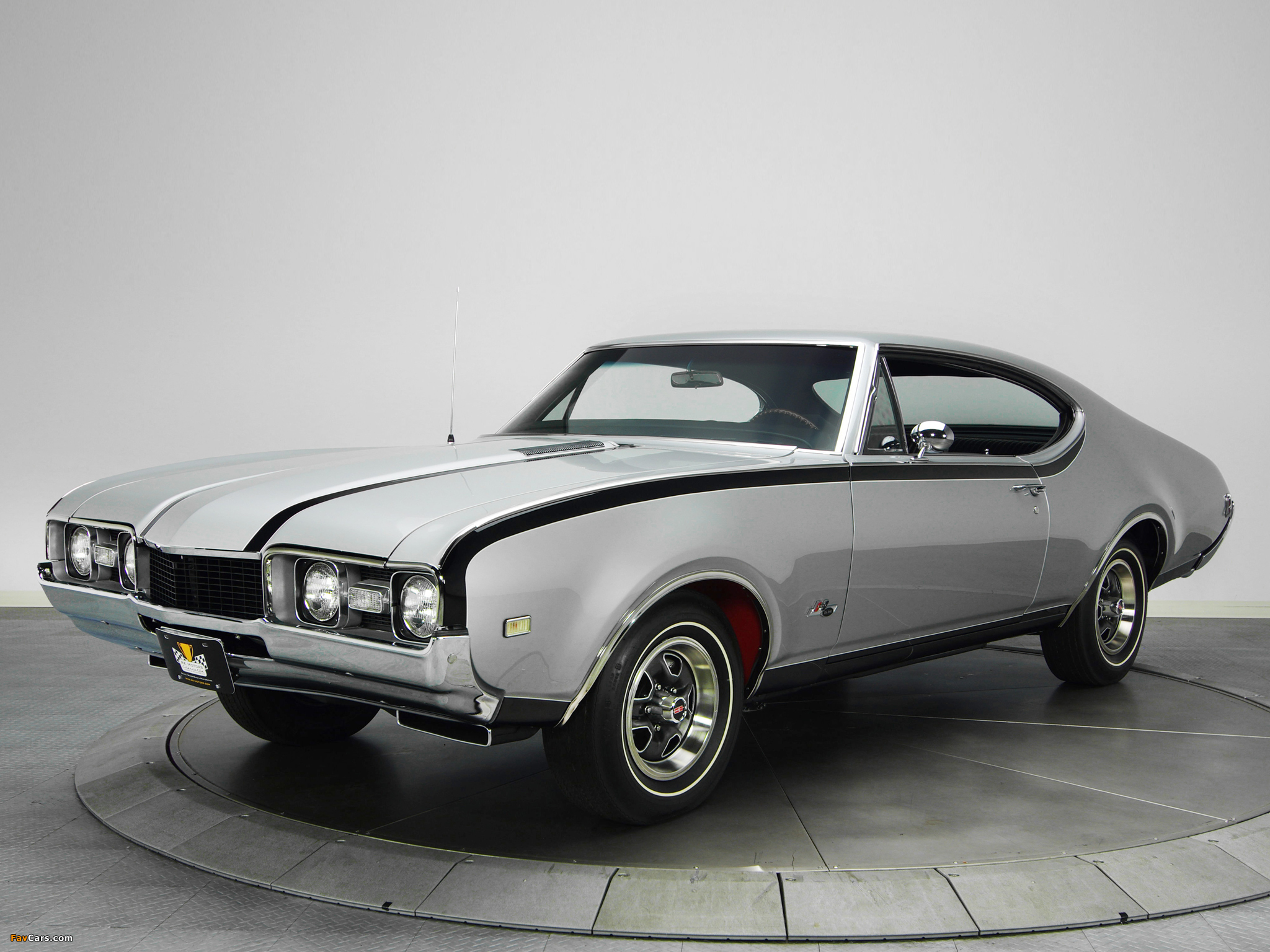 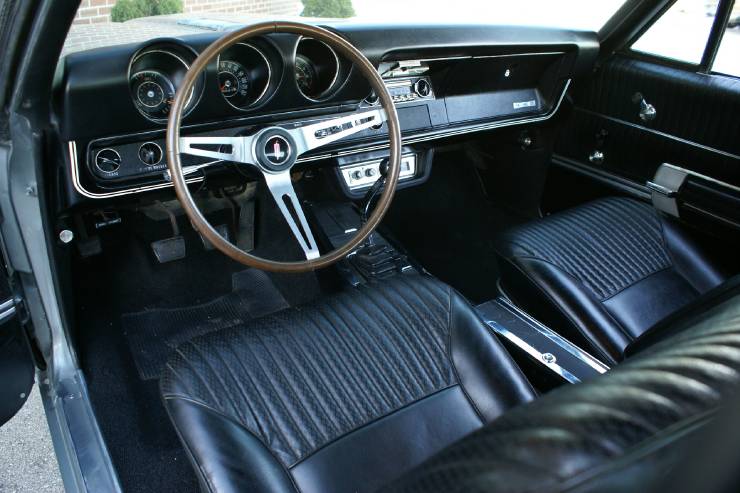 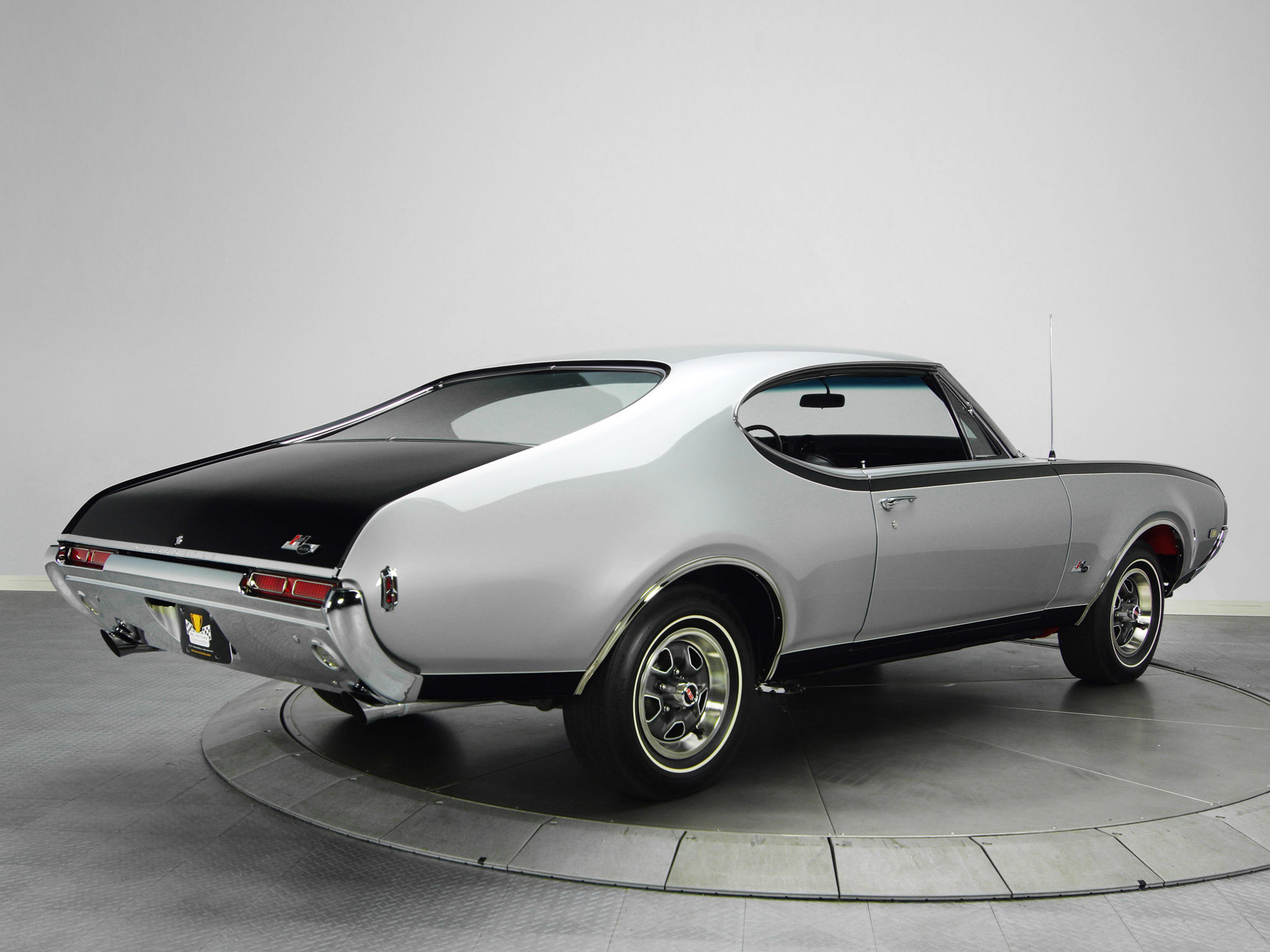 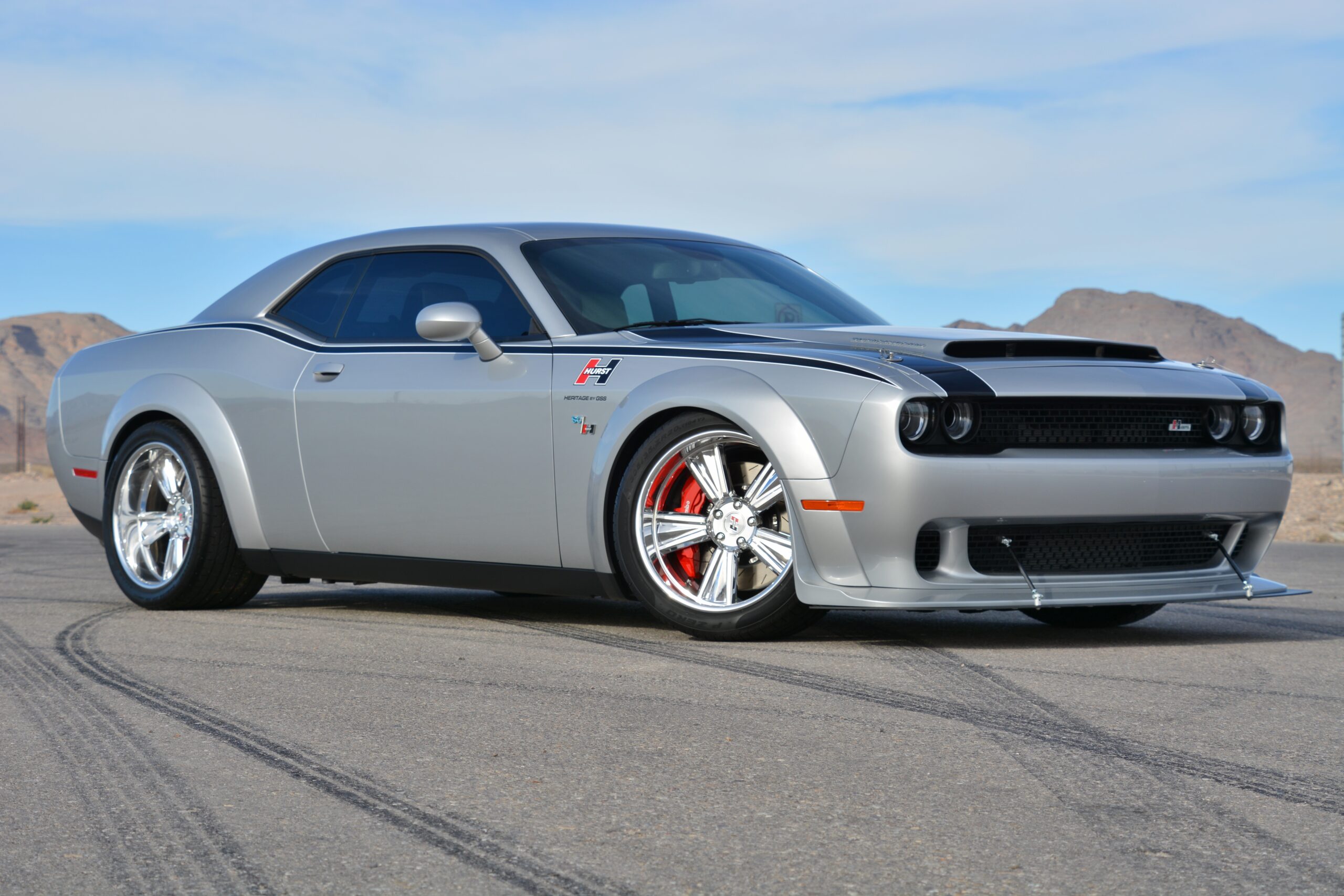 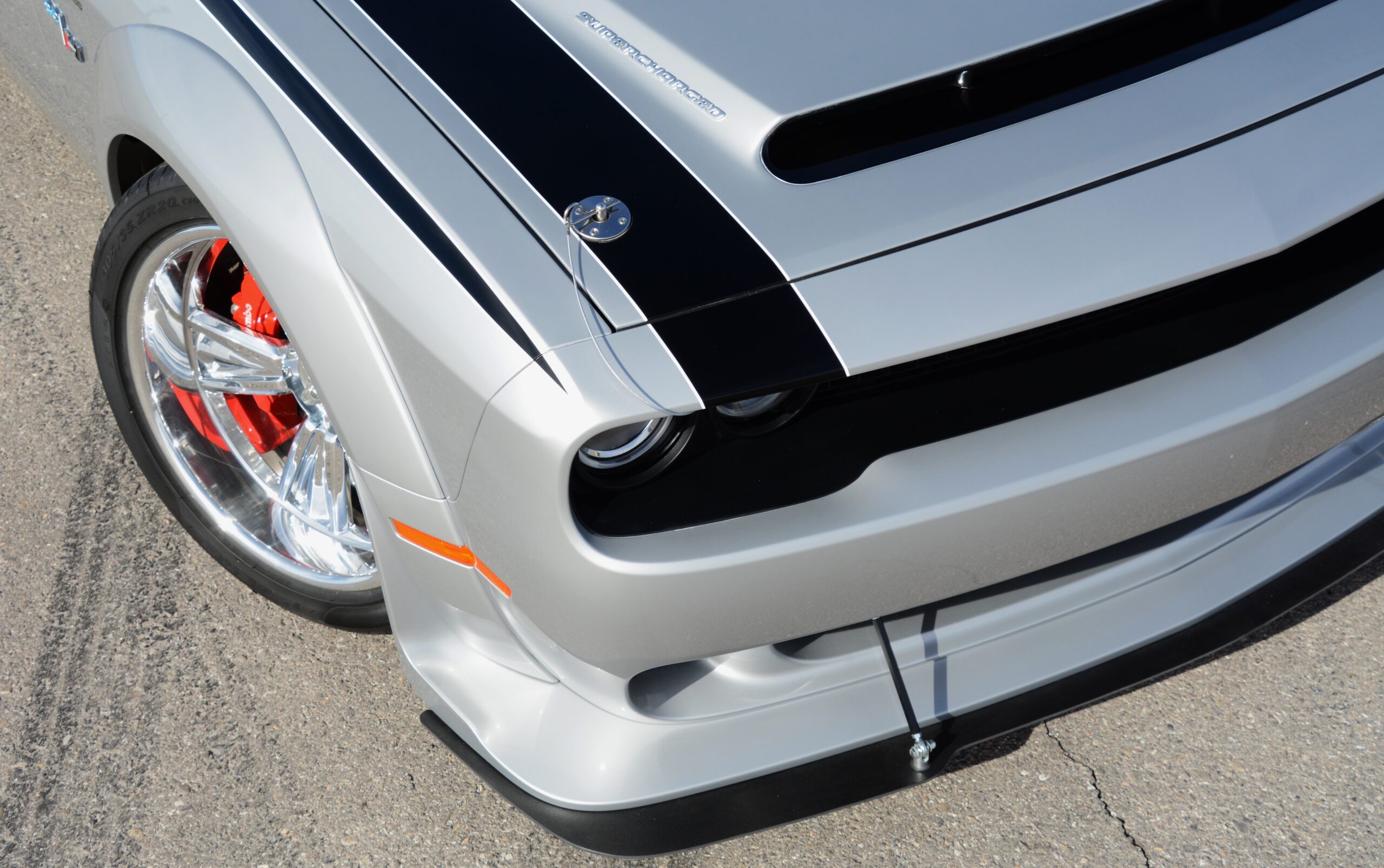 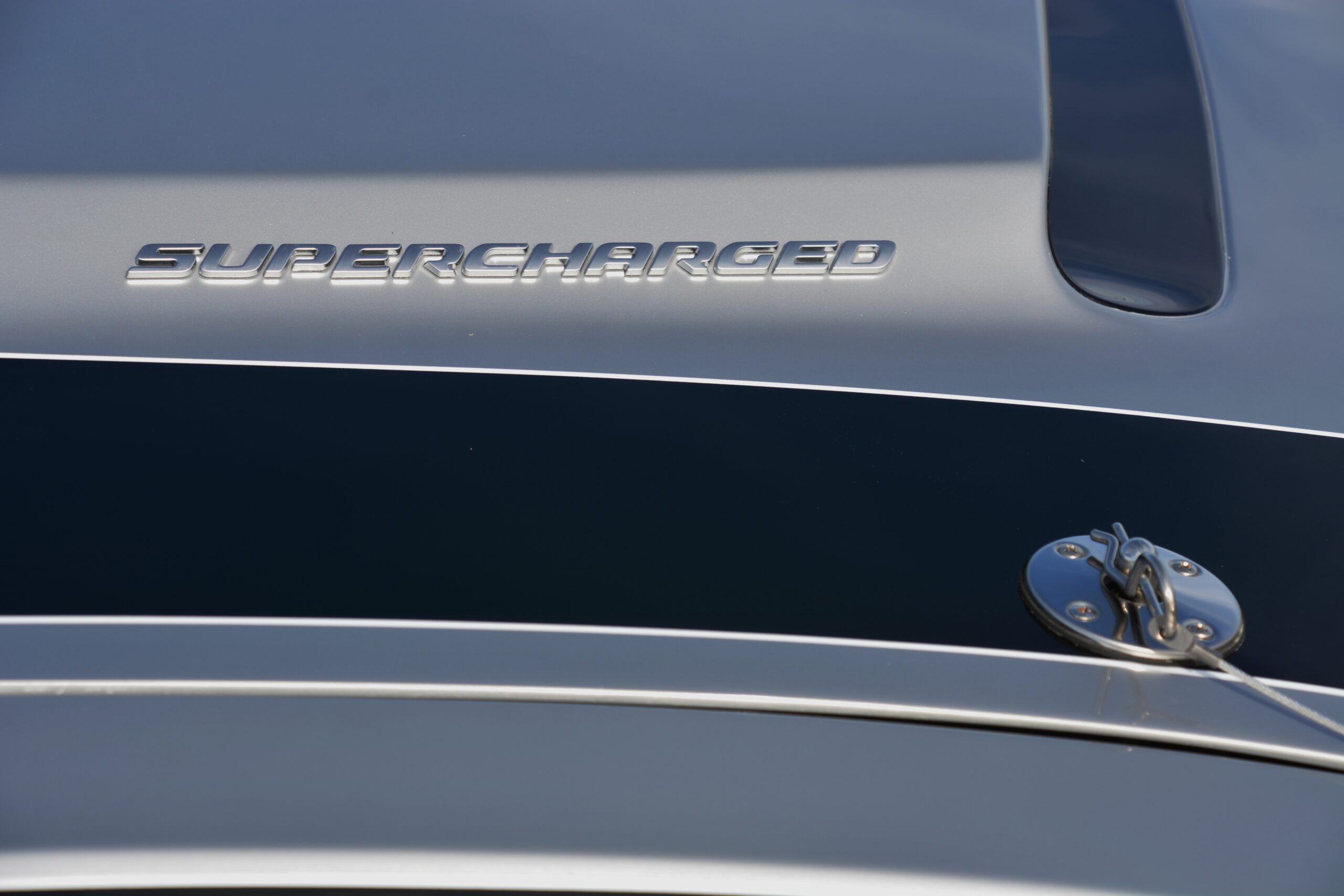 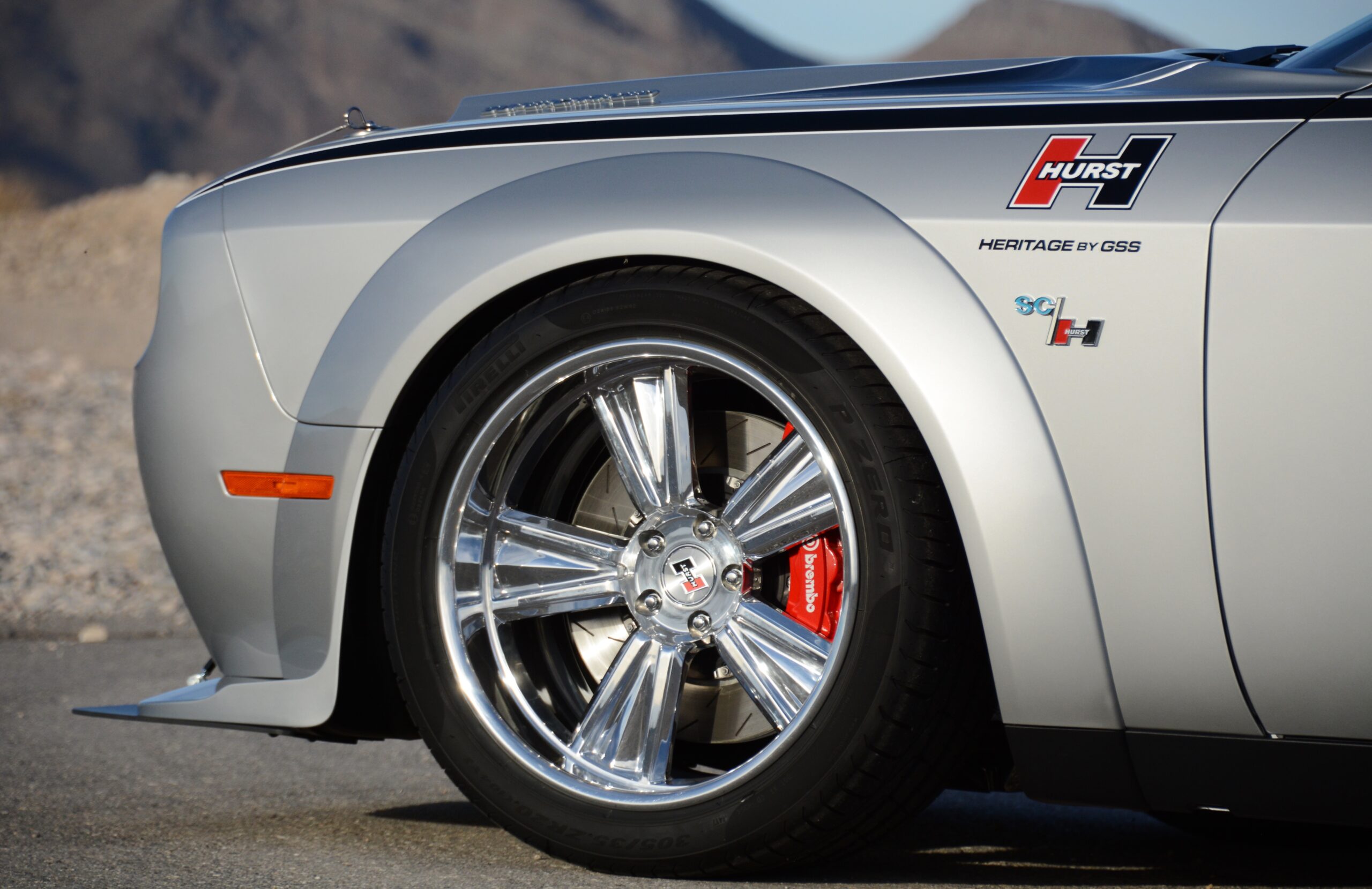 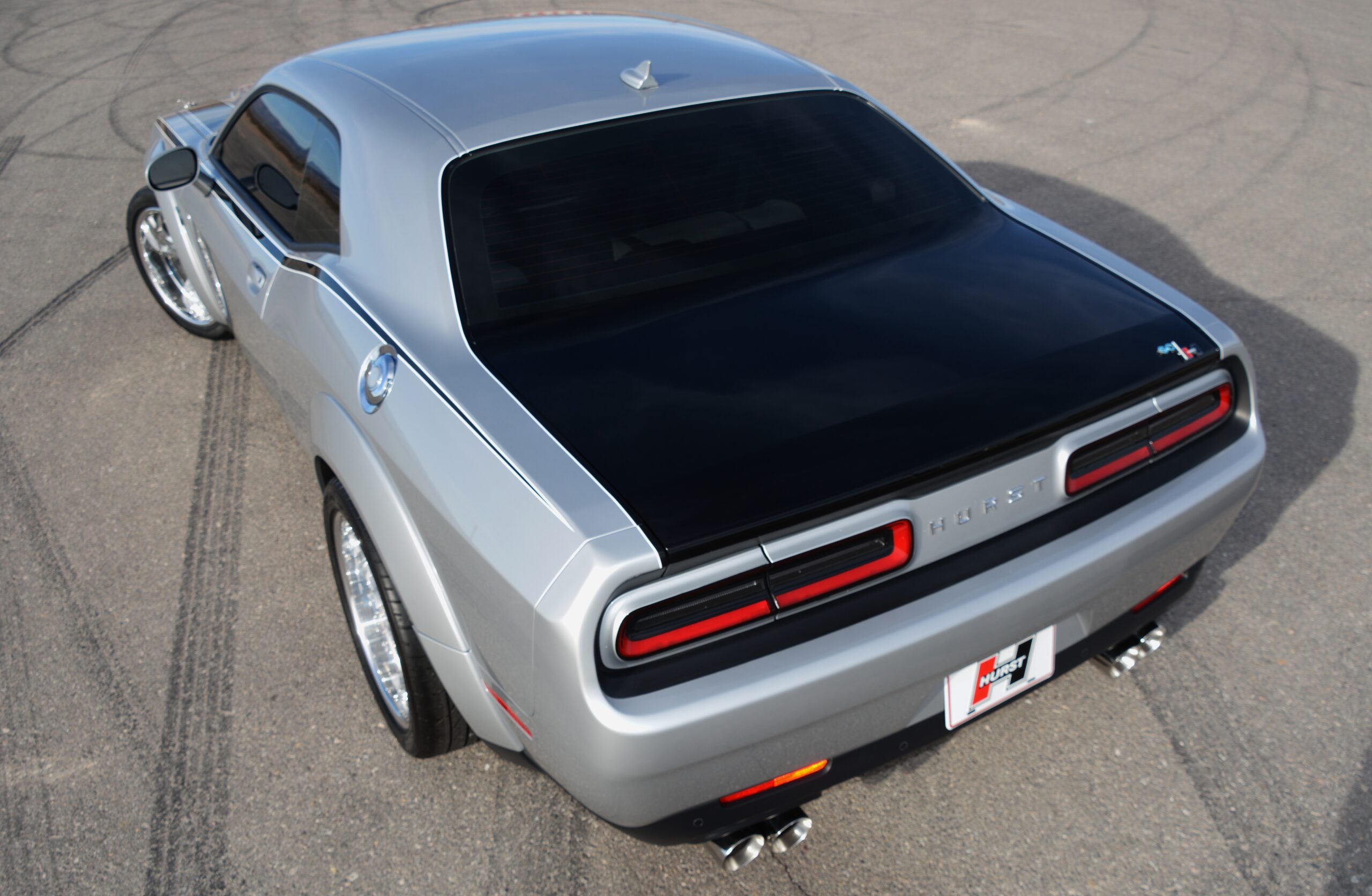 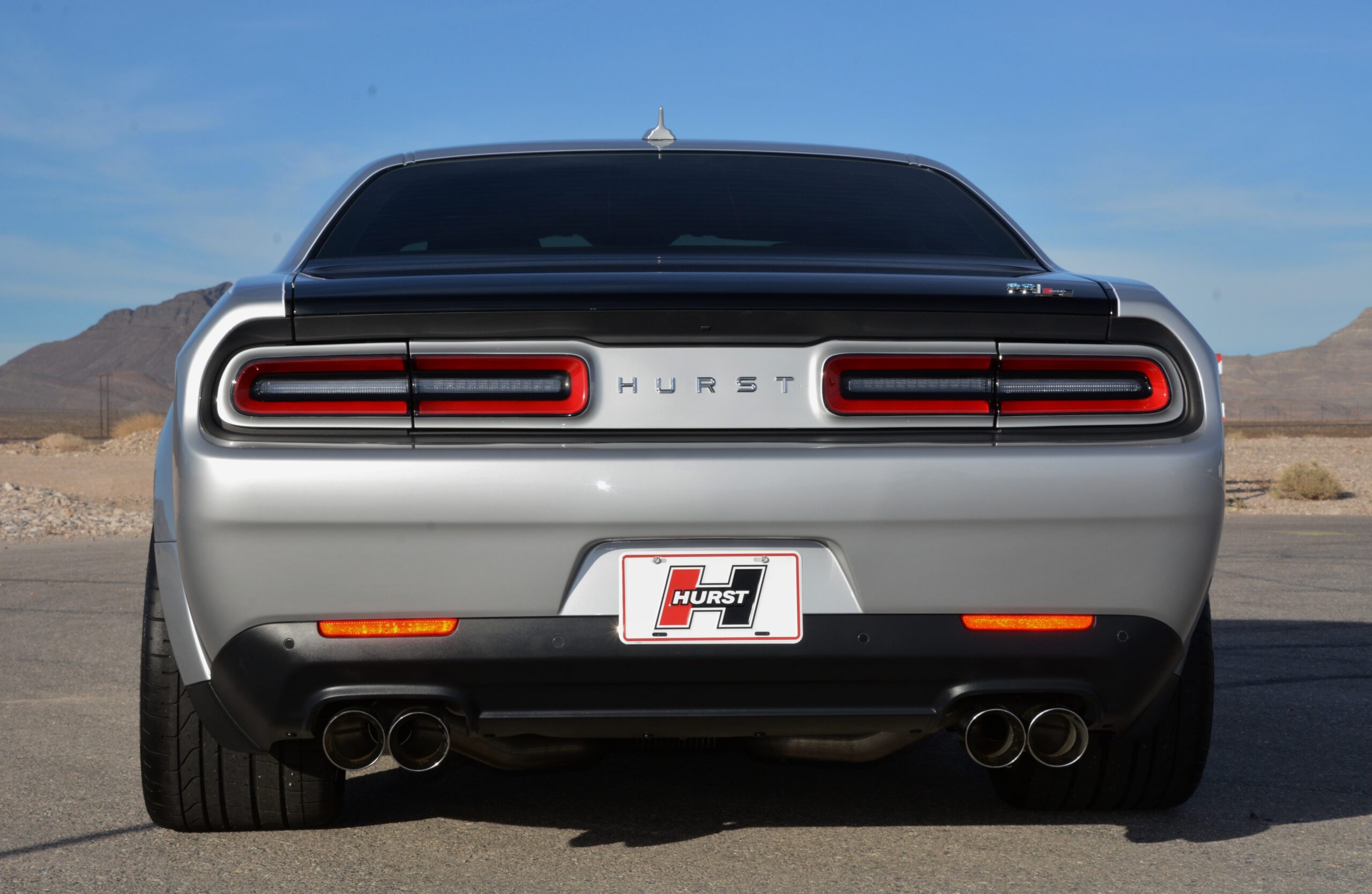 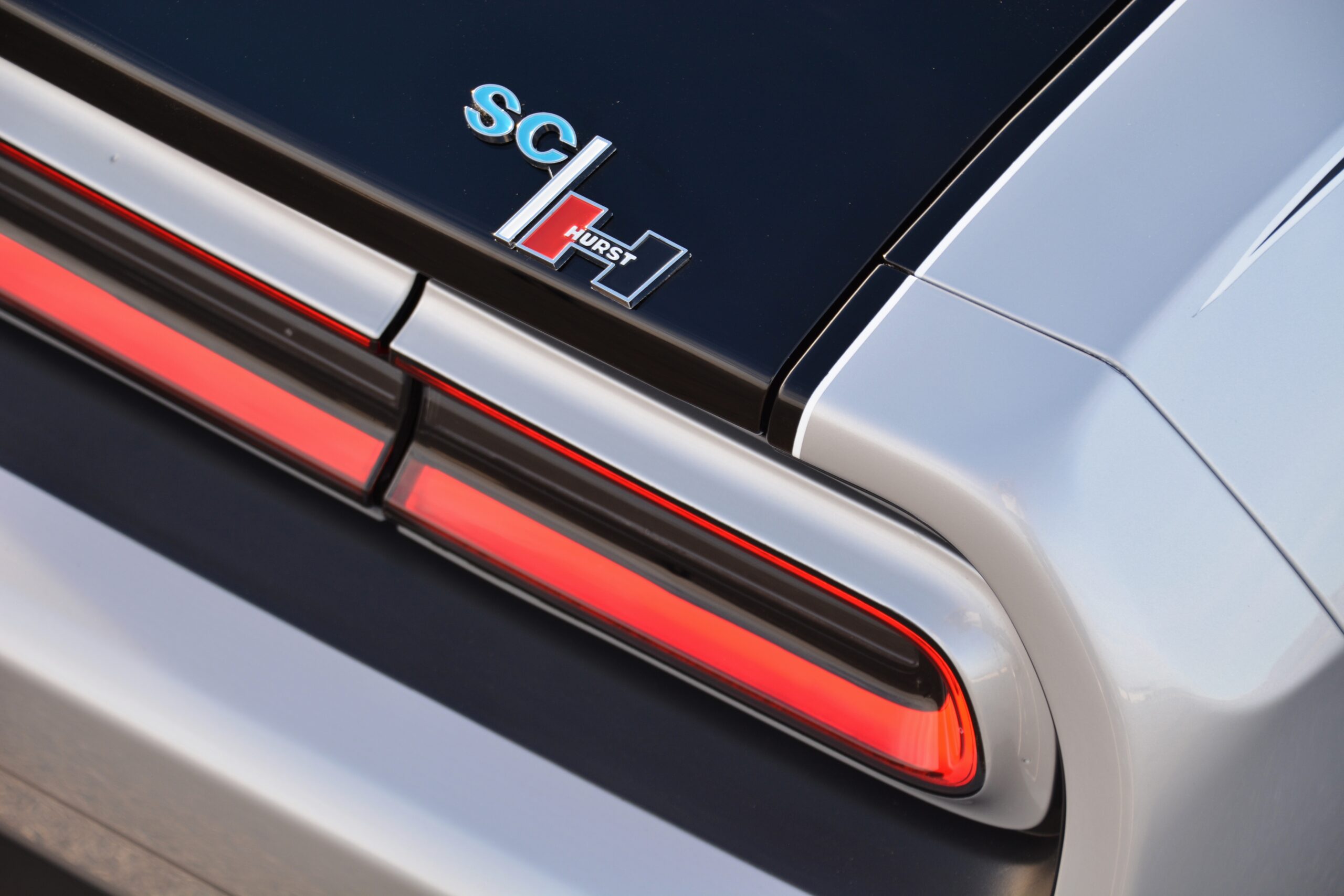 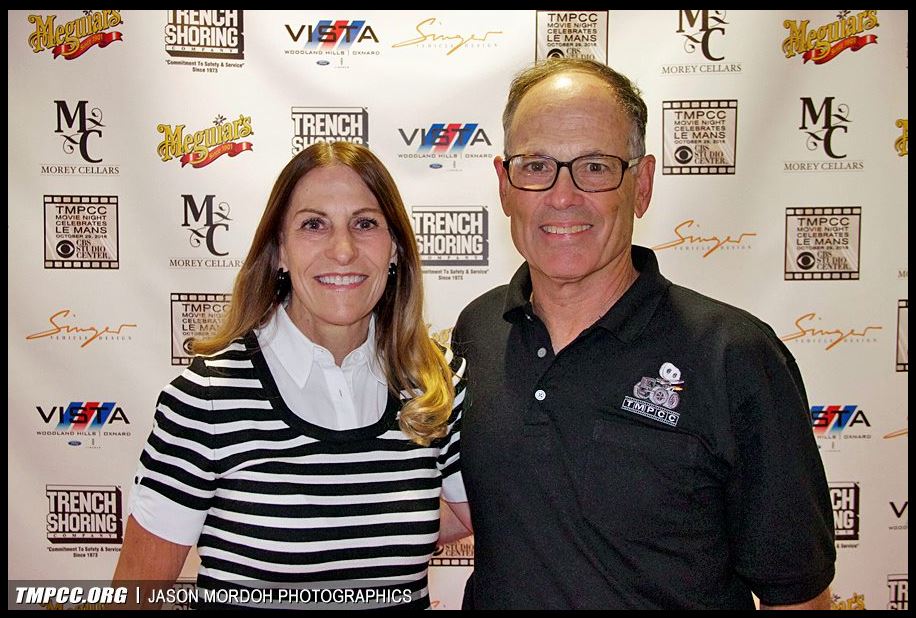 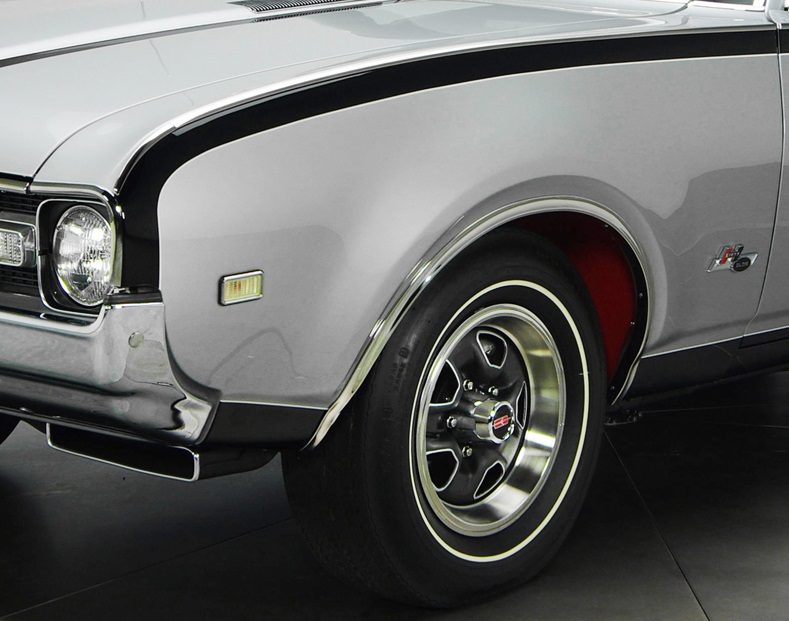 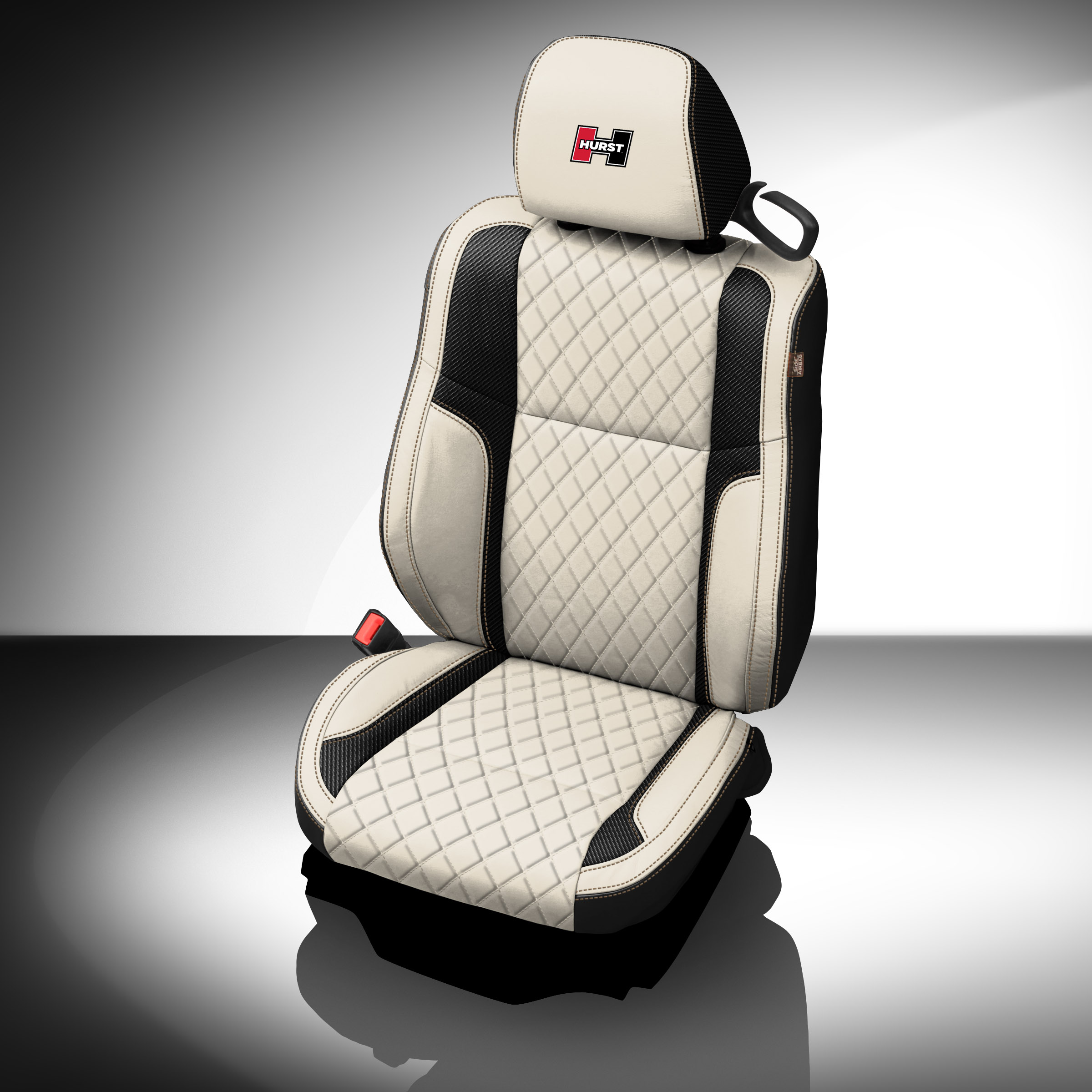 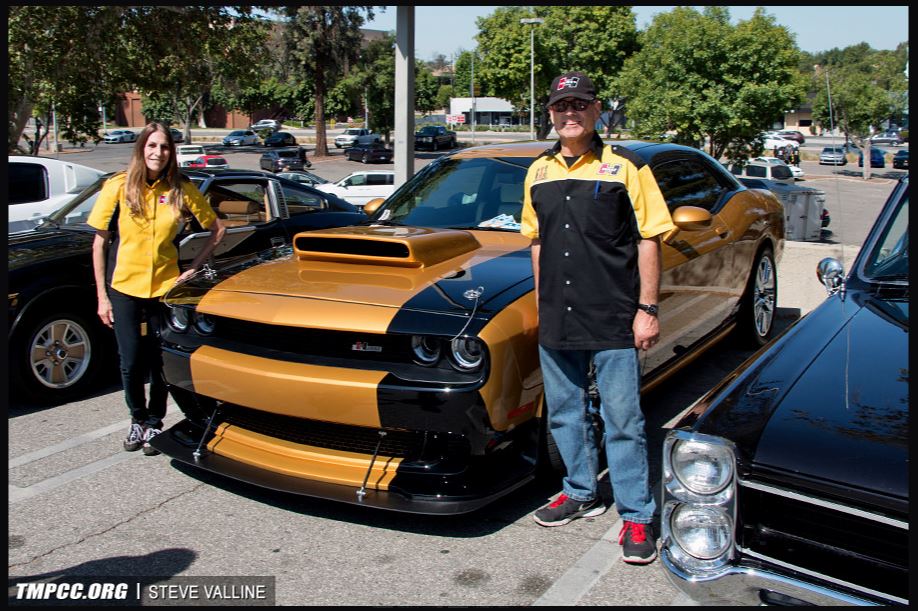